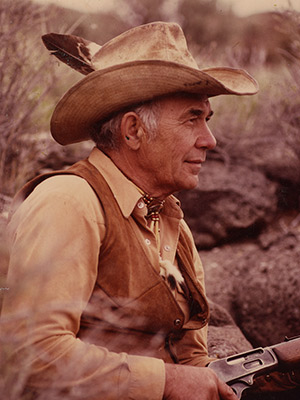 Alfred Y. Ziegler was born on May 24, 1918, in Pierre, SD.  An enrolled member of the Lower Brule Sioux Tribe, Alfred’s artistic talent showed at the early age of thirteen when he created a remarkable sculpture out of P & G soap.  He received considerable attention from the P & G Company, which offered him a scholarship, which he declined.  Ziegler attended elementary school at St. Joseph’s Indian School in Chamberlain, SD, and Iron Nation School on the Lower Brule Reservation, graduating from Stephan High School in Stephan, SD.  He went on to earn an electrical degree from Coyne Electrical School in Chicago, IL, in 1943.

In his youth, Alfred was well-known on the Midwestern rodeo circuit as a bull and bronc rider.  He also had an illustrious career in the prize-fighting ring as a golden glove boxer.  He enlisted in the U.S. Army in 1943, and upon completion of his military tour, he returned to Lower Brule and settled into cattle ranching.  Throughout his endeavors, Alfred remained faithful to his artistic calling and produced paintings and sculptures regularly. After retiring and serving three terms as a Lower Brule Sioux Council Member, Ziegler focused on his full-time hobby— bronze sculpting.

1n 1979, Alfred relocated to Embudo, NM, where he secured a gallery, foundry, and studio along the Rio Grande. It was here Ziegler, a self-taught wax-bronze sculptor, began to create his own molds and cast each bronze piece in his own studio. He brought an unequaled artistic flavor to his self-styled method of bronze casting.

After many years of establishing varied contacts in the Santa Fe area, Ziegler moved his studio back to his home in Lower Brule. Although best known for his bronze sculpting, Alfred also worked in oil, stone, wood, and paper sculptures.  He was one of the few sculptors to complete his works entirely by himself, from the wax carving of the original art to the final casting process.  He was also a noteworthy welder and patina specialist. His works are widely represented in museums and private collections throughout the country and abroad.

Ziegler was inducted into the South Dakota Hall of Fame in Chamberlain, SD, in 1981 for having contributed to South Dakota in the area of Indian Heritage.