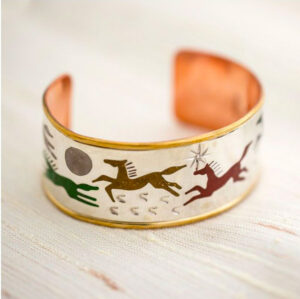 "We use a lot of cultural symbolism in our work—you can't separate Lakota culture from our spirituality. So my work is really inspired by a combination of creativity and our spirituality."  –Zephier

Mitchell Zephier was raised in South Dakota on the Cheyenne River Indian Reservation. He started working in metal in the 1970s during a high school exchange program in Rochester, NY, learning from a friend, Frank Standing High, who was also an art teacher there. Frank showed him the basics of cutting and shaping metals and significantly influenced Mitchell’s pursuit of the arts.

Mitchell later lived in New Mexico and apprenticed with his aunt, a master silversmith, who taught him the delicate inlay process used by the Zuni people. Zephier’s passion always remained in creating art rooted in Lakota culture, history, and spirituality.

“My learning process began in New York and in New Mexico, but I always wanted to develop my own style. I wanted my work to draw on Plains Indian symbolism, using images of shields, buffalo, medicine wheels, eagles, and horses,” he explained. “So when I moved back to Rosebud, I started developing the distinctive style we have now.”

Over the years, Zephier honed his craft, creating stunning jewelry and other adornments that honor and celebrate his Lakota heritage and the beauty of the Great Plains. He has collaborated closely with other artists, relatives, and friends throughout his career to design unique styles that tell Lakota stories distinctly. Some of his most prized pieces depict key moments in Lakota history: he once made a Concho belt illustrating nine events in the life of Crazy Horse, the famed Lakota warrior, and another that presented a series of essential Lakota legends. His work has been honored at some of the country’s most prominent Native art shows, including the Red Earth Festival in Oklahoma and the Santa Fe Native American Art Market in New Mexico.

Early in his career, Zephier encountered the challenges that emerging artists so often face. After opening his first shop on the Rosebud Reservation decades ago, he was uncertain whether he could make a living by selling his art alone. He began to travel to galleries and shops across the Plains and quickly developed a following that gave him the confidence to devote his career to metalwork.

Zephier creates his pieces using a range of metals from German silver to brass and copper.  He signs his pieces PVH, the initials of his Lakota name, Pretty Voice Hawk.  Drawing on what he learned about inlay work in New Mexico, he creates intricate pieces from earrings and bracelets to full Concho belts using natural elements like pipestone, buffalo horn, and mother-of-pearl. His work is sold and receives attention worldwide; he cherishes his role as a teacher and mentor to many emerging artists.

“My work kept me so busy and at first I didn’t consider myself much of a teacher. But my grandmother said that, as a Lakota, I needed to help my relatives in any way that I could,” said Zephier. “Over the years I have taught over 30 people, and some have gone on to their own careers in jewelry making.”

Today Zephier’s work is truly a family affair. He has taught his craft to his brother and cousins, working alongside them over the last 30 years—and now his own children are helping with the evolution of his business.

After 40 years of designing and crafting wearable works of art, Zephier still wants to challenge himself—and to discover new markets across the country and around the world. One thing that will never change is what inspires him to create.