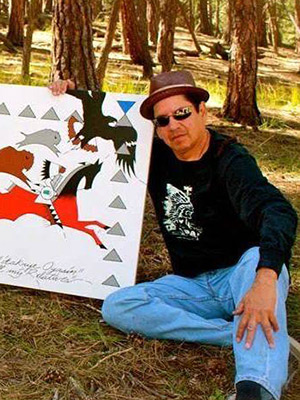 Jim Yellowhawk grew up on the Cheyenne River Reservation in South Dakota. He is an enrolled member of the Itazipco Band of the Cheyenne River Sioux Tribe and the Onondaga/Iroquois on his mother’s side. Yellowhawk was immersed in the arts of his ancestors since he was a young boy. His grandmother, Annie Yellowhawk, was a traditional bead worker and role model for traditional ways, and his father, Jerry Yellowhawk, is a passionate artist in various mediums.

Yellowhawk graduated from Marian College, Indianapolis, Indiana, with a Bachelor of Science in Art. He also studied at Columbus College of Art and Design, Columbus, Ohio.

Yellowhawk has experimented with innovative media, such as neon light, mixed-media airbrush, bark paper collage and even painting on umbrellas. His work portrays traditional symbols such as the eagle, the buffalo and the circle about which he has strong beliefs.  Yellowhawk’s artwork is in public and private collections across the country.

He has brought his art to the international community, including being invited to perform Lakota men’s traditional dance at venues worldwide. Having spent time in New Zealand, he now exhibits his art in galleries there. He currently resides in the Black Hills of South Dakota.