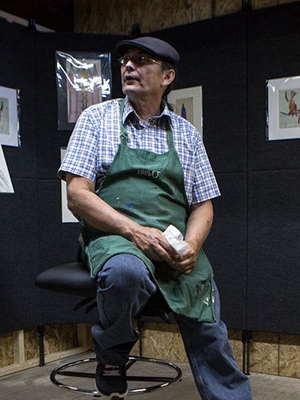 “I’m alive now. Our time today is just as important as the past.” -- Wilcox

Dwayne “Chuck” Wilcox is a master contemporary Plains ledger artist. He began his artistic endeavors in high school, and although he considers himself to be self-taught, he cannot overlook the multiple mentors he has had along the way. He continues to be inspired through research and often consults historical examples to gain further insight into his works.

In 1987, Wilcox began his professional career as a full-time artist. His ledger art emphasizes the contemporary life of Native peoples, not a life of the past – although he often does like to revisit “older subjects” with poignant sarcasm and wit. He focuses on vignettes of Indian life infused with humor and favors depicting powwows, social dances, families and everyday mundane activities. He has revolutionized ledger art by using it to show the lives and dilemmas of modern Indians. An understanding of cultural history and his personal, lived experiences inform his work. He displays an uncanny ability to convey his observations of complex human situations in a single image.

Throughout his career, Wilcox has won numerous prizes and placement ribbons. His work has been exhibited in museums and galleries both nationally and in Europe. Awards include the 2010 First Place Mixed Media award and the Honikle Humor award at the Red Cloud Heritage Center, Pine Ridge, SD.  Exhibitions include shows at the Hood Museum of Art in Dartmouth, NH, the Harwood Museum in Taos, NM, Harvard’s Peabody Museum, Cambridge, MA, and the Dahl Arts Center’s Permanent Collection, Rapid, City, SD.