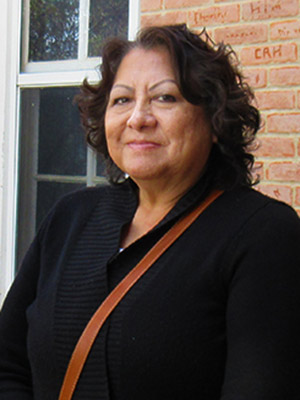 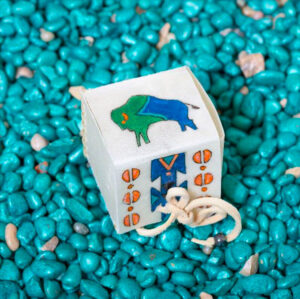 “I think Andy Warhol summed it up best for me when I read his quote ‘Land really is the best art. As a lifelong fan of his work, I feel that I’ve found my own way of self-expression. Art is everywhere — if you open your eyes.” – Two Bulls

Lorri Ann Two Bulls grew up in the Red Shirt Table area, a community on the outskirts of the Badlands located on the Pine Ridge Indian Reservation in South Dakota. She began creating her art long before she ever considered herself a working artist.

Growing up on the reservation for Two Bulls meant that art was always an intrinsic part of daily life. Exploring the Badlands as a child, she would immerse herself in creating something new with the objects she found. In 1978, she entered a portrait series called The Beatles in the Red Cloud Indian Art Show, her formal entrance into the art world.

She continues to create work starting from scratch, working with organic materials such as wood, clay, animal hide, parfleche, sinew and other items from the Land and environment around her.

Painting with acrylics and watercolor is a favorite medium. Her works have been exhibited at the Dahl Arts Center in Rapid City, S.D.; Aktá Lakota Museum, St. Joseph’s Indian School, Chamberlain, S.D.; and the Red Cloud Art Show, among other venues. Two Bulls is a regular participant in Native POP: People of the Plains, where she won the Innovation Award in 2020.

Two Bulls also creates jewelry and other art pieces, giving each item a personal, one-of-a-kind flair. She is known for her handcrafted clay turtles and vibrantly painted Christmas ornaments. She makes eye-catching painted bracelets and pins, and creates delicately painted small animals and geometric shapes with touches of gold metallic and gemstones.

Two Bulls is also  well-known for her Owicakapte, meaning, “I survived,” doll pins. She began making the doll pins using brain-tanned elk buckskin after being diagnosed with Non-Hodgkin’s Lymphoma in 2002, she began making the dolls using brain-tanned elk buckskin. The dolls are for anyone facing or surviving a significant challenge in their life.