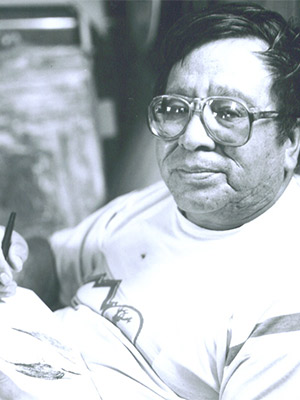 Two Bulls, a self-taught artist, worked mainly in oils. He taught art in the country schools in Shannon County in South Dakota for many years. In 1980, he was involved in an automobile accident, which left him a person with paraplegia. In 1985, Eddie received the “Artist of the Year Award” for South Dakota by the Cowboy and Western Heritage Hall of Fame. He also received the Engdahl Award by Sister Kenny Institute International Art Show for disabled artists.

He once stated he had painted 15,000 paintings in his career. His works captured American Indian life and its rich heritage. Having devoted his life to education and the arts, Eddie passed away on March 9, 2011, at the age of 74.