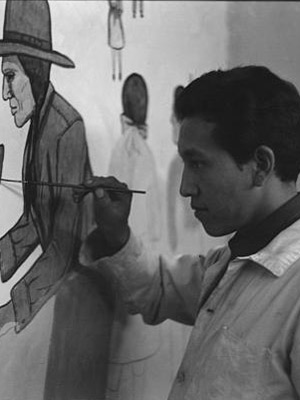 In 1937, Standing Soldier studied under Olaf Nordmark, a federal artist-in-residence in Pine Ridge, SD. At age 22, he won a major prize at the 1939 World’s Fair in San Francisco, CA, for a watercolor submitted to the United States Pavilion.

Much of Standing Soldier’s work resulted from commissions, including illustrating several of Ann Clark Nolan bilingual readers sponsored by the Bureau of Indian Affairs.

His own style was well executed, subdued, and simplified, yet in proper perspective, it was suggestive of the unusual land formations on the Pine Ridge Reservation. He succeeded in creating recognizable, coherent backgrounds and authentically portrayed human subjects.

In 1961, he and his family moved to Gordon, Nebraska, here, he found a patron Douglas Borman, a local auto dealer. Standing Soldier was encouraged to paint in Borman’s auto showroom, and as a result, the Borman family collected a significant body of his work. Many regional people also collected his work, including the owners of Wall Drug at Wall, SD.

Standing Solider, of all his peers, withstood the tests of time and excellence. His works and life continue to be studied and readied by scholars and universities today. It is a fitting tribute to one who emerged fully from a transitional period with his art, unrecognized in his own lifetime. His modernized fine art forms forged the Modern or Contemporary Fine Art Movement for Sioux artists.