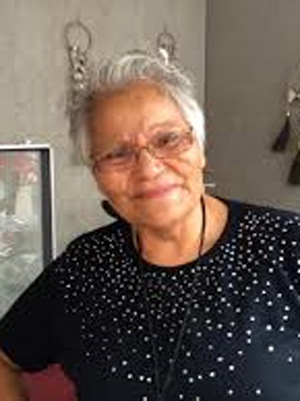 “A great deal of my work revolves around the rattle, a sacred object used in spiritual ceremonies. Medicine men use the rattle during prayer, believing that the sound helps carry their prayers to the Great Spirit. I call my art pieces amuletic forms with audio aesthetics, referring to the sacredness of the rattle and the sound (voice) that emanates from the pieces.” – Schrupp

Nelda Schrup was born in 1952 and grew up on the White Bear Indian Reservation in Saskatchewan, Canada. Everything she creates reveals her roots.  She earned a Bachelor of Fine Arts in 1990, majoring in Art with a concentration in Ceramics and a minor in Jewelry and Small Sculpture at the University of North Dakota, Grand Forks. The experience enticed her to study metalwork in more detail.  In 1993 she entered graduate school at the University of North Dakota, where she received a Master of Fine Arts in Metalsmithing, Jewelry and Small Sculpture.

Immediately she began to make her mark in the art world by winning at art shows with her distinctive style and combining her heritage with inspiration from the European masters to create her work.

Each shape, color, and material used in her amuletic rattles holds significant meaning:

Crafted in silver, gold, copper, horsehair, deer antler and semi-precious stones, the pieces truly draw the eye and mind into her world.

The youngest of 11 children, Nelda earned her degrees at the University of North Dakota, a BFA in Visual Arts in 1990, with a minor in Anthropology and an MFA with an emphasis in metalsmithing, jewelry and small sculpture in 1993.

Schrupp has been honored as part of many exhibitions. She was named a Smithsonian Art Fellow, and her work is included in the permanent collections of the Renwick Gallery in Washington, DC, the Eiteljorg Museum of American Indian and Western Art in Indianapolis, Indiana, the Atká Lakota Museum, at St. Joseph’s Indian School and The Heritage Center at Red Cloud Indian School.

Her work has also been published numerous times, including Native Peoples Magazine, Changing Hands: Art Without Reservations 2, and North American Indian Jewelry and Adornment from Prehistory to Present.