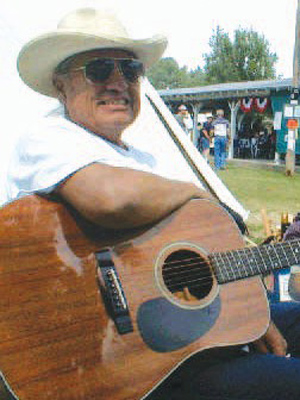 “I am continually experimenting with new mediums, new ideas or old ideas done as contemporary art … Art was an extremely important part of the Lakota culture. Indians decorated everything: their buffalo robes, tipi liners, back rests, clothing, parfleches, and war shields … everything they used. Then at the BIA schools, art was not taught or encouraged. I was told that Indians should forget about those ‘playthings’. Art is a survival process related to our aptitudes, our coping skills and our environment. Artists are the preservers of the inner spirit. We are the continuum. I believe that good art is alive and well in Lakota country.” — Vic Runnels

Victor “Vic” Runnels was born December 15, 1935, at Batesland, South Dakota. As a young boy in grade school, Vic’s family moved to Gordon, Nebraska. He graduated from Pine Ridge High School and went on to a year of college in Huron, followed by a year of college in Brookings.

Inspired by the work of artists Oscar Howe and Andrew Standing Soldier, Runnels began to study art in the early 1960s. He continued his commercial art studies at Ray-Vogue School of Design and the American Academy of Art, both in Chicago, which led him to a career as a successful commercial artist.

After twelve years as a commercial artist-illustrator in Chicago, he returned home to Pine Ridge in 1973 and devoted his life to the fine arts. As a prolific artist in a variety of media, his traditional modernistic style combined dreamed animals with their dreamer human figures. His use of color tended to the high-intensity registers. While he knew color compositions, his works remained alarming, jarring, and raw. Runnels continually experimented with traditional tribal motifs in his work and produced a number of offset lithograph reproductions.

Runnels was one of nine Sioux artists instrumental in organizing the Dream Catchers Guild. The purpose of this organization was to re-establish the importance of art in the American Indian culture, to promote art markets, and to encourage emerging Sioux artists.

Having devoted his life to the arts, Vic passed away on January 29, 2017, in Aberdeen, South Dakota.