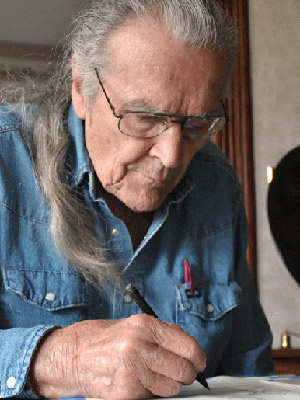 Donald D. Ruleaux was born in Martin, South Dakota in 1931 to an English mother and a French Canadian/American Indian father.  An enrolled member of the Oglala Lakota Tribe, he spent his early childhood on the Pine Ridge Indian Reservation, reflected in his portrayal of the Lakota people.

Ruleaux’s teaching experience spanned several decades and included grade schools, high schools, colleges, and universities in South Dakota and Nebraska. He also worked as a cartographer for the United States Geological Survey, a package designer for Bemis Brothers Bag Company, and an artist/draftsman for the movie “Lakota Woman” (1994), filmed in the Black Hills area.

Ruleaux worked in many different mediums and styles as an artist but was best known for his rare silverpoint drawings and beautiful watercolors.

The importance of his work in the context of American Indian art was apparent by his inclusion in “The Biographical Directory of Native American Painters” and “Who’s Who Among the Sioux.” He also served as an advisor for the traveling exhibit “Heartdreams and Legends: Story of Two Peoples,” a survey of Northern Plains indigenous artists and the indigenous Aboriginal artists of New South Wales, Australia.