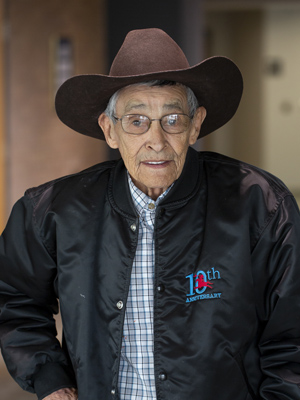 “My idea of racial harmony is expressed with an easel and a smile.”
– Rich Red Owl

Richard “Rich” Red Owl was born in 1940 on the Pine Ridge Reservation in South Dakota and is an enrolled member of the Oglala Sioux Tribe. Red Owl’s artistic expressions are self-taught. He prefers discovering for himself without formal instruction.

Red Owl studied and received inspiration from Oscar Howe, Hobart Keith, and Charles Russell. Over the years, he has experimented with cubism, realism, and abstract compositions. He prefers to work in acrylics on canvas because he feels that the bright and warm colors help bring out the gentle and colorful traits of the Lakota Sioux people.

Red Owl’s work is in private and public collections across the country. He participates annually in the Red Cloud Art Show in Pine Ridge. Red Owl has collected numerous awards, including the Best Depiction Award in 1993 and the prestigious Oscar Howe Award in 1994. In the late 1960s, he helped found the Oglala Sioux Artists Association and later the Dreamcatchers Society.

Red Owl lives in Kyle, South Dakota, and is one of the many Native American artists working and living on the reservation. He works out of Red Owl Gallery and Studio located at his home.