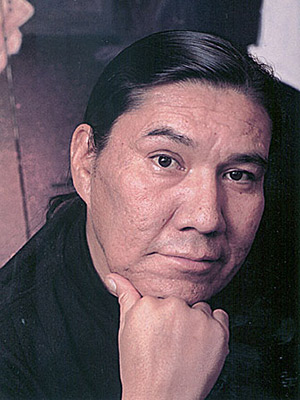 Known for: Abstraction, illustration, and teaching.

“Abstraction of symbols and themes can re-interpret and integrate the modern world as seen from an Indian viewpoint without strict adherence to traditional art forms and can transcend both worlds to become contemporary modern art as well as a cultural statement. I am constantly aware of the danger of being typecast as far as subject matter goes; there is far more to my vision than just recreating pictures of the past. Art has always been my central issue ... it is also my biggest prayer.” – Robert Penn

Penn attended high school at St. Francis Mission on South Dakota’s Rosebud Reservation. In 1972, he earned his Bachelor of Fine Arts at the University of South Dakota (USD), Vermillion, SD.

While at USD, Penn worked as an art instructor and illustrator. In 1986, he pursued his painting career full-time. Penn lived and worked in Vermillion, SD until he died in 1999 after a long battle with lung problems.

Penn was a protégé of the late Oscar Howe, and at one time, he was a work-study assistant for the internationally known Sioux artist. However, Penn’s style was uniquely his own as he explored the art world with various media and styles.

He painted the truth as he saw it. He attributed his talent to a gift from Wakan Tanka – the Great Spirit – a gift he was given to use, explore and develop.
His work is included in many public collections such as the Smithsonian Institution in Washington, DC; the Minneapolis Institute of Arts, Minneapolis, MN; the Vincent Price Gallery in Chicago, IL; and the Atká Lakota Museum at St. Joseph’s Indian School, Chamberlain, SD.