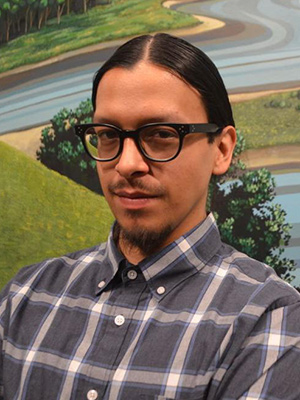 Henry Payer, Ho-Chunk of the Winnebago Tribe of Nebraska, is a multidisciplinary artist living and working in Sioux City, Iowa.

Working primarily with collage and mixed media, Payer references the altered landscape through indigenous cartographic methods of “picture-writing” combined with European modernist models of cubism, spatial distortion, and collage. Each work offers a visual narrative of symbols and appropriated voices from American consumer society. The symbols and voices reconfigure history, the landscape, or the identity of a portrait.

He has exhibited his work at the All My Relations Gallery in Minneapolis, MN., Sherry Leedy Contemporary Art in Kansas City, MO, and Janus Galleries in Madison, WI. In 2015 he taught at the Oscar Howe Summer Art Institute at the University of South Dakota, Vermillion, SD, and at Little Priest Tribal College in Winnebago, NE. In 2011 and 2014, Payer was awarded Best of Show at the annual Northern Plains Indian Art Market. In 2016 he received Best of Division: Two Dimensional at the Fourth Annual Native POP: People of the Plains.