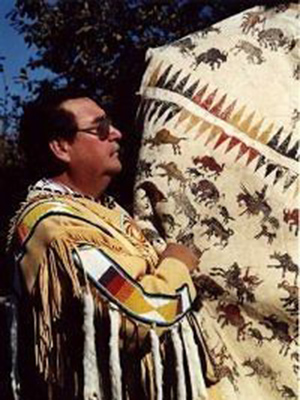 Dreams are invisible voices calling me, sustaining me, carrying me in difficult times. — King Kuka

King Kuka was born in Browning, Montana, and raised in the Birch Creek Community on the Blackfeet Indian Reservation. He received his early schooling at Valier, MT., graduating from the Institute of American Indian Art, Santa Fe, NM, in 1965.

During the Vietnam conflict, he was drafted by the US Army and served two years before receiving an honorable discharge.  He then returned to Montana, enrolling at the University of Montana, Missoula, MT, earning his Bachelor of Fine Arts degree in 1973.  He began teaching at Helena Junior High School in Helena, MT before transferring to Browning High School in Browning, MT where he taught art from 1974-1977.

King began his full-time art profession in 1978 and spent countless hours in his Great Falls Studio.  He worked in watercolors, oils, bronze, steel, silver, and gold. His art reflected his dedication to Native people and their spirituality.

Art was not a simple pastime but the spiritual essence of his life. A strong creative mind rises to meet challenges, and so it was with King. Kuka’s quest was made, and he found his creative spirit. Kuka believed in dreams, the vision kid, the night dreams, and the distant one.

King Kuka passed away on January 24, 2004, in Great Falls, Montana. His family keeps his legacy alive through his “Kukagraphs,” embossed lithographs, a printing process he developed and perfected.

“Art should be an evolutionary process where the artist perfects the process as well as his product. I sold my first work in high school at the Institute of American Indian Arts in Santa Fe, NM. Since then, my work has changed, I have discovered new media, and I have tried to excel at what I do. I try to produce the most professional art that I am capable of doing.” (King Kuka, 1988)

“By splattering and working wet on wet, I diffuse the subject so the result is more ghostly, more an apparition, and a hallucination, a dream than a hard edge subject with lots of slick detail and void of anything for viewers’ imagination. I am not painting a rider on a horse. I’m painting color and texture and Indian spiritualism with a mystical, ethereal look.” (King Kuka, 1992)