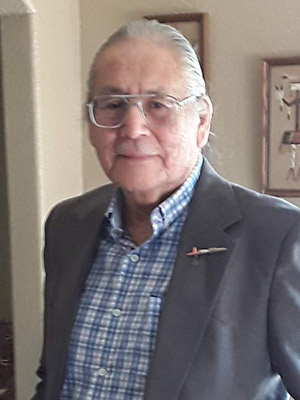 Del Iron Cloud was born at Little Eagle, South Dakota on the Standing Rock Reservation in 1949.

At age five, while living with his grandmother, he created his first “masterpiece.” Unfortunately, the canvas was her kitchen door, and a bucket of water and a sponge quickly replaced his crayons.

While attending St. Joseph’s Indian School at Chamberlain, SD, he won his first art contest in third grade. The students were asked to draw posters showing what they wanted to be when they grew up. He drew a soldier with binoculars crouching in the back of an army truck with explosions bursting in the background. He wrote under it, “I want to be an Army man to protect my country.”

Upon graduating from high school in 1968, he entered the Institute of American Indian Arts in Santa Fe, NM. Two years later, he received his postgraduate degree and attended the American Academy of Art, Chicago, IL.

In 1971, he received his draft notice and enlisted in the United States Air Force. While stationed in England, Iron Cloud had a chance to study the European artists and present some one-person shows. Eventually, the Air Force recognized his immense talent and transferred him to the graphics department.

Throughout his military career, Iron Cloud continued to work in his studio and exhibit his art. His work varies from realistic portraiture and military jets to airbrushed motorcycles, murals, and Indian and western art.

In 1991, Iron Cloud retired from the Air Force after serving 20 years. Since then, Iron Cloud has re-focused himself on his first love: painting.  In 1994, he completed his first mural at the Grand River Casino in Mobridge, SD.  He has created more than one hundred murals adorning the walls of Indian casinos and private businesses across South Dakota, North Dakota, and Nebraska.

As an established artist, he has won many awards and gained much recognition for his talent. His ability to paint military subjects and Indian art has made Iron Cloud one of the most versatile American Indian artists today.