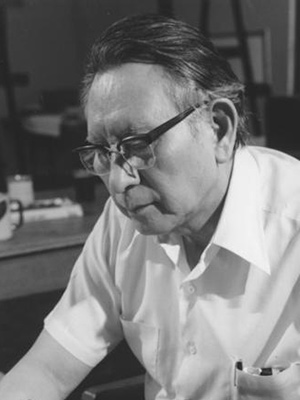 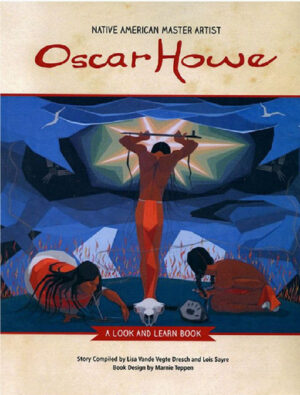 Born in Joe Creek, South Dakota on the Crow Creek Reservation on May 13, 1915, Howe was given the name Mazuha Hokshina meaning “Trader Boy.” He completed grade school at the Pierre Indian School. He entered the Santa Fe Indian School in 1935 to work in the art program established by Dorothy Dunn, graduating as salutatorian in 1938.

Between 1940 and 1942, Howe worked as an artist with the South Dakota Works Progress Administration completing mural projects in Mitchell and Mobridge, SD. Following three years of service in the US Army in the European Theatre, Howe entered Dakota Wesleyan University, Mitchell, SD, earning a Bachelor of Arts in 1952. He received his Master of Fine Arts degree from the University of Oklahoma, Norman, OK, in 1954.

Howe taught at the Pierre Indian School until 1957 when he became artist-in-residence and professor of art at The University of South Dakota, Vermillion, SD, where he served until retiring in 1980 as Emeritus Professor of Art.

Oscar Howe’s formal art education began in “The Studio” at the Santa Fe Indian School, and his early work rejected the concepts promoted there. In the early 1950s, Howe abandoned the Santa Fe style in favor of a more abstract and personal way of painting. Working mainly in casein on heavy watercolor paper, Howe developed his mature style by 1960, marked by bright color, dynamic motion, and pristine line. These qualities give Howe’s paintings a modernist character. Still, he based his style on the abstract tradition of Northern Plains Indian art, often citing the linearity of hide paintings as a principal source of inspiration.

Howe was among a relatively small number of artists who led the Native American Fine Arts Movement towards broader personal expression. He was on the cutting edge of his generation in exploring ways to break out of the stereotypes imposed on Indian artists and seek contemporary ways of communicating American Indian values and ideas.

A measure of Howe’s influence on the course of American Indian art is his often-cited challenge of the stylistic standards established by the Philbrook Art Center’s national competition. His 1958 letter eloquently refuted the prevalent but decidedly limited definition of traditional Native art and is credited with opening museums to a greater range of styles and expressions by Native artists. His aspiration to be accepted as a professional artist who bridged Indian tradition with the contemporary world made him an inspiration and model for many younger artists.

Over a 40-year career, Howe earned many honors and awards, including numerous grand and first prizes in national competitions. As a student in Santa Fe, NM, Howe exhibited works in New York, London and Paris, and subsequently was represented by more than 50 solo shows.

In 1954, Howe was named Artist Laureate of the Middle Border, and in 1960, Artist Laureate of South Dakota. In 1966, he was awarded the Waite Phillips trophy for outstanding contributions to American Indian art from the Philbrook Art Center, Tulsa, OK. Howe was the first recipient of the South Dakota Governor’s Award for Creative Achievement in 1973. He received the Golden Bear Award from the University of Oklahoma, Norman, OK, in 1979.