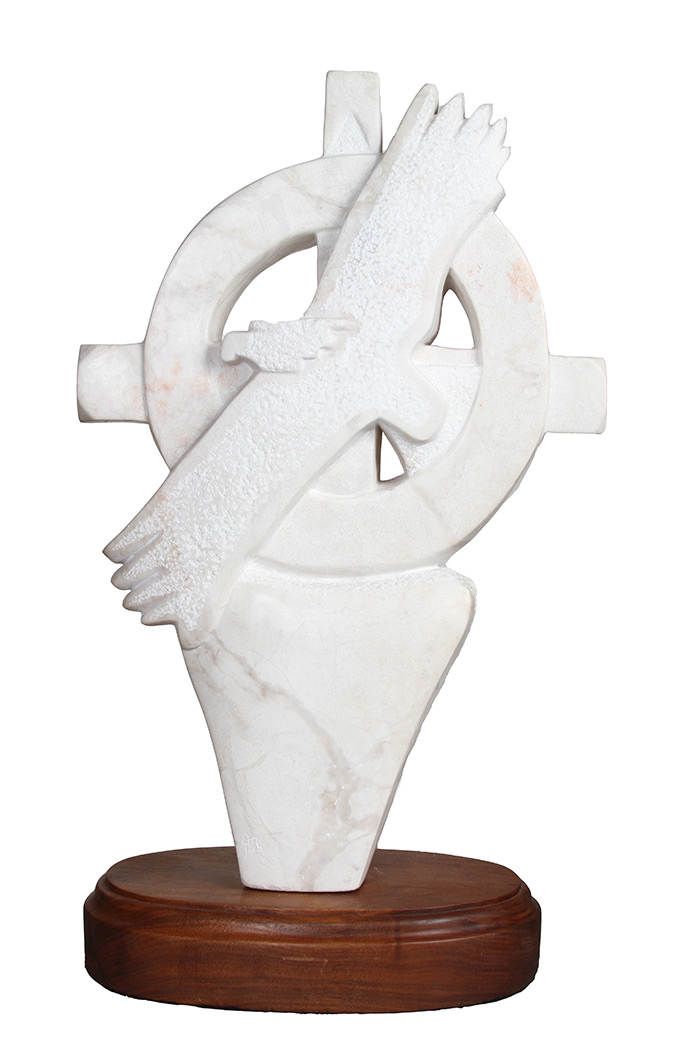 Known for: Sculpture and educator

Alfred Decoteau is an enrolled member of the Turtle Mountain Chippewa Band. He was born in Grand Forks, North Dakota in 1949 and attended boarding school from age 7 through high school. He served in the US Army during Vietnam and received an honorable discharge in 1969.

Decoteau’s formal art training began at the University of North Dakota. There, he received a degree in secondary education with a minor in art. Alfred pursued his career as an art teacher with the Dunseith Public School District in North Dakota. After 25-years of teaching, he retired and began his full-time art career.

To Decoteau, rock has a spirit, and he tries to articulate this belief through his work. Decoteau works to describe his people’s culture through the rock itself . . . bringing its spirit out to highlight Native American culture.

When asked why the Turtle Mountain Band seems to produce such fine sculptors, Alfred said, “I’ve thought about this a lot. It seems to be inherited . . . something out of our woodland heritage. We see the negative space in the stone. I think in a woodland environment, unlike the plains, to be a good hunter a man needed to be able to associate the positive and negative views to be able to see without looking. It’s a right-brain function, to observe a forest scene and let the negative space reveal the scene for the hunter. That’s why our lines and expression as Ojibwa artists are different from the Sioux who use much more geometric lines like you find on the open prairie.”

Though he works primarily in alabaster, marble, and South African Wonderstone, Decoteau does make an effort to work with wood once or twice a year. Over the years, Decoteau has won numerous awards at the United Tribes Art Expo and at shows in Sioux Falls, South Dakota, and Billings, Montana. He is most proud of his first-place award for best stone carving at the huge Red Earth Art Show in Oklahoma several years ago. He placed second in the bronze category at the same show . . . the only time he has exhibited at Red Earth.