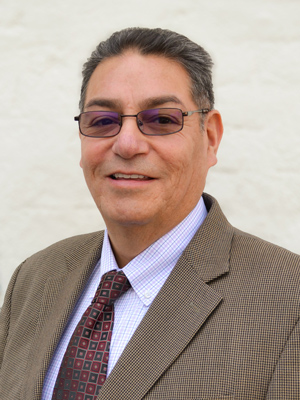 “My paintings reflect cosmology of the Lakota Sioux people. The symbolism of the geometric shape, color usage and repetitive motif reflects a verse in a song, the more often you sing, the closer you are with the Great Spirit,” — Gerald Cournoyer.

Gerald Cournoyer, Sr. an enrolled member of the Oglala Sioux Tribe from Marty, South Dakota followed in the footsteps of prominent Dakota painter Oscar Howe to the University of Oklahoma, Norman, OK, to pursue and eventually achieve his Masters of Fine Arts in Painting.

Cournoyer’s first memory of becoming an artist goes back to the second grade when he enjoyed paintings and drawings. “I dreamt of being an artist and took advantage of art schools throughout middle school and high school.”

After high school, he joined the Marine Corps, and upon his discharge, he enrolled at Black Hills State University in Spearfish, SD, taking art classes. He then transferred to the Institute of American Indian Arts School in Santa Fe, NM, where he received his Associate in Fine Arts. He earned his Bachelor of Fine Arts and a Master of Interdisciplinary Studies at the University of South Dakota, Vermillion, SD.

During his early years of college, as an art student, Cournoyer dealt with and overcame many struggles and barriers to succeed in his passion of becoming an artist. He interprets his cultural history in his drawing and paintings. The status quo is a huge factor in the world of artists. “Experience will teach you, in order to survive, you need to study and be prepared in the field, be true to yourself as there is a market for everyone’s work, you have to find it.”

He was employed as a professor of painting at the University of Oklahoma. Mr. Cournoyer also holds a Master in Art Management degree, allowing him to utilize his expertise in networking and developing relationships among artists and funding agencies supporting artist philanthropy. He recently earned a Master in Philanthropy and Fundraising from Central Michigan University, Mount Pleasant, MI.

Cournoyer is a dedicated and creative artist whose artistic boundaries were expanded under the tutelage of Professor George Hughes. Cournoyer came from a skilled background of stylized ledger art and figurative Indian portraits. Over time, his work developed into vibrant abstract watercolors and acrylics. This eventually led him into patterns of Lakota quillwork, rawhide parfleche, and beadwork on canvas, including large nonfigurative expanses of color and form that offer the viewer an opportunity to explore the depth of scintillating color combined with Native patterns. These intricate patterns are based on the early geometric patterns of the Northern Plains quill designs and are prominent in the Lakota iconography. Cournoyer’s work is now shown in regional, national and international venues.