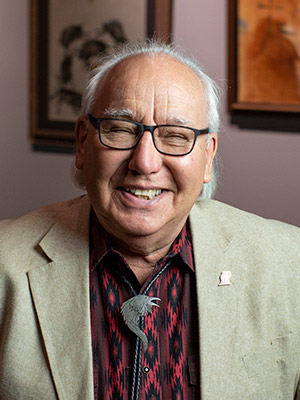 “As an artist with a limited attention span, I have found that the monotype is a great tool for me to use because it is so immediate.  I get an idea, work it through the monotype process, and walk away. I can come back to it later to enhance or polish what I have already done, but the image was captured in the first few minutes of addressing it.” -- Broer

Roger Broer was born in Omaha, Nebraska in 1945 and is an enrolled member of the Oglala Lakota Oyate.

His family’s economic hardships led to his removal from his Oglala Lakota mother and placement in an orphanage. Broer was adopted at 2 years of age into a family of a German blacksmith and was raised in rural Randolph, Nebraska. After military service, he returned to South Dakota to spend time with relatives on the Pine Ridge Reservation.

His formal art education began when Broer enrolled at Eastern Montana College, Billings, MT in 1971. After receiving his Bachelor of Arts with Extended Fine Arts Degree, he earned credits toward a Master of Fine Arts at Central Washington University, Ellensburg, WA.

During his career, Broer has received more than 50 awards in national shows, including the Northern Plains Tribal Arts and Northern Plains Indian Market, Trail of Tears Art Show, and the Red Cloud Indian Art Show.