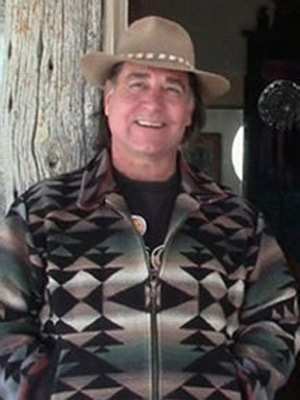 Known for: Pottery and painting

Competition is a stimulating and positive aspect of my life. It is a way for me to endeavor to the best I can be as an artist. It makes me think of the pride my Oglala ancestors would feel counting coup. It makes me feel like a modern day road warrior. — Randall Blaze

Randall Blaze, of Oglala Lakota descent, grew up and graduated from high school in Montana. Then, he enlisted in the US Navy.

Returning to Montana, Blaze began college as an English major, before pursuing his childhood love of art.  Blaze earned a Bachelor of Fine Arts degree with honors from the University of Montana in 1977.

A visual artist, Blaze focused on jewelry making for the first decade of his career. He then switched to working primarily in ceramic, incorporating his jewelry techniques into his ceramic designs, in addition to painting, works in glass, and other mediums. More than two decades later, Blaze returned to his love of metals and began working in bronze.

Today, the artist resides in South Dakota on the land of his ancestors.  He finds it a peaceful place — a land of beautiful sunrises and beautiful sunsets.

“I travel to schools all over the state, although I am partial to working with kids on the rez, as it brings me full circle with my life and heritage. I was taught the concepts and techniques of art by a generation before me, and I will pass that knowledge on to a generation after me.”

While enthusiastic about teaching, Blaze remains truly enamored by metal and has continued working with bronze for over twenty years.

“Art is a passion, but making it into a business has involved going all over the country for major exhibitions. A lot of my success revolves around winning awards. Winning awards at open markets, and I always encourage young artists to enter shows, especially shows with competitions. Competition inspires me to do my best work and each one brings me back to square one in the creative process. But, attending shows is also about cultural diversity and, for me, sharing the essence of what the Lakota tribe is, on a cultural level.”

Blaze has received dozens of national awards over his four-decade-plus career. Accolades include Artist Fellowships at the Smithsonian, the Heard Museum in Phoenix, and the Eiteljorg Museum in Indianapolis, a book Heartdreams and Legends published in 2000, several prestigious Best of Division and First Place Awards, and many others. He has traveled internationally as well, participating in exhibitions in Japan, Germany, and Australia. His work is represented in numerous public and private collections including the Aktá Lakota Museum.