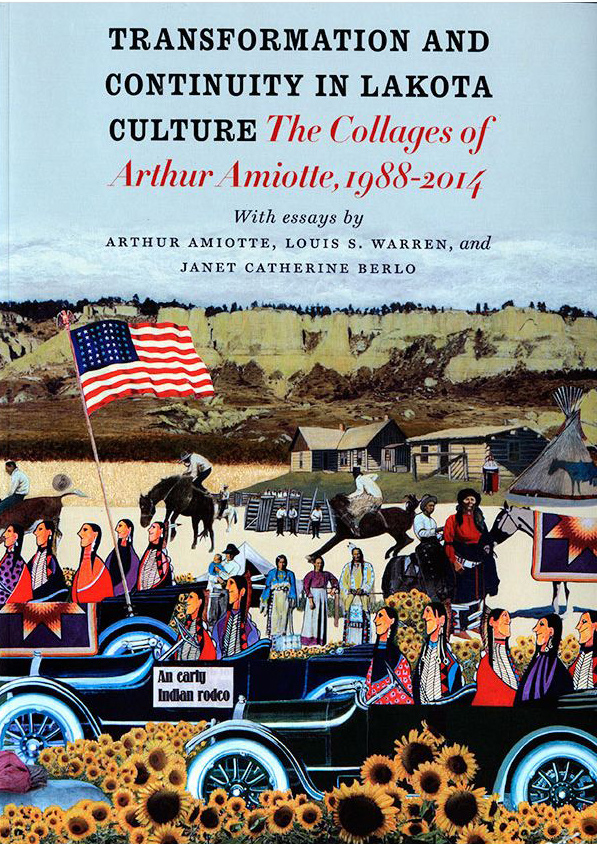 Arthur Amiotte (Wanblí Ta Hócoka Washté or Good Eagle Center) was born on the Pine Ridge Reservation in 1942 and raised between there and Custer, SD. He is a member of the Oglala Lakota Oyate. Given the Lakota name Warpa Tanka Kuciyela or Low Black Bird as an infant, he received his second Lakota name in 1972.

He credits his interest in the tribal arts to living on the reservation and being with his family as they participated in traditional tribal arts and ceremonies.

He received a Bachelor of Art Education from Northern State College in Aberdeen, SD, in 1964 and a Master of Interdisciplinary Studies in Anthropology, Religion, and Art from the University of Montana, Missoula, MT. There he studied with renowned scholar, Joseph Eps Brown. Amiotte holds honorary doctorates from Oglala Lakota College, Kyle, SD, and Brandon University, Manitoba, Canada.

While several college professors encouraged Amiotte to pursue art as a career, Dakota (Sioux) artist Oscar Howe inspired him to utilize his Lakota background and culture in his artwork. Peter Catches, Sr., a respected elder, and practitioner of sacred Oglala traditions, mentored him.

Amiotte is one of the most influential artists portraying Lakota life, thought, and philosophy in the Northern Plains Region. Lakota philosophy and oral history form the foundation of his artistic work. His creativity as a whole is an expression of the Lakól wicóh’an washtélaka – the love of the Lakota traditions. Lakota rituals and visionary experiences during traditional ceremonies impact his work.

He realized that contemporary art was ignoring the whole reservation period, which was a dynamic time. Some people were going to school in the east, to Carlisle and Hampton, and others were moving onto land allotments. They were familiar with print media and exposed to a lot of magazines, pictures, and photographs. There were new technologies, and a mixture of non-literate and literate infused daily life. Amiotte said, “It seemed to me that it was more honest to deal with all this in my art, rather than to create a fake hide painting.”

Ledger art inspired his collage work, but he took it to a new level in a pointed and sharp-witted manner. The collages reveal the discrepancy between tradition and modernism in Lakota culture. He also explores the experiences of Lakota people in Europe during the Wild West show era of the early 20th century.

Amiotte has participated in over 100 exhibitions, more than twenty of them solo. He has shown throughout the United States and Europe, including at the Kunsthallen Brandts Klaedefabrik in Odense, Denmark in 1994-1995. His work ranging from painting to sculpture to textile objects is in 26 public and nearly 200 private collections. It is at the Denver Art Museum, Denver, CO; the Sequoyah National Research Center, Little Rock, AR; the Smithsonian National Museum of Natural History, Washington, DC; The Heritage Center at Red Cloud Indian School, Pine Ridge, SD; the Aktá Lakota Museum, St. Joseph’s Indian School, Chamberlain, SD and many others.

Appointments to prestigious boards and councils are recognition of his stature as an educator and artist. These include a temporary advisership to the Smithsonian’s National Museum of the American Indian director and the Presidential Advisory Council for the Performing Arts at the Kennedy Center. He also served on the Indian Advisory Board of the Buffalo Bill Center of the West, Cody, Wyo. He is a member of the Board of Directors for the Native American Art Studies Association, a commissioner of the United States Department of the Interior’s Indian Arts and Crafts Board, a member of the Council of Regents of the Institute of American Indian Arts and a member of the Aktá Lakota Museum Collection Advisory Committee.

Amiotte curated numerous museum exhibitions about tribal culture on the Great Plains. Examples include the Wheelwright Museum of the American Indian in Santa Fe, NM, the Aktá Lakota Museum in Chamberlain, SD, the Buffalo Bill Center of the West, Cody, WY., and the Museum of World Cultures, Frankfurt am Main, Germany.

Amiotte is the recipient of an impressive array of awards, including Arts International, Lila Wallace Reader’s Digest Artists at Giverny Fellowship, a Getty Foundation Grant, a Bush Leadership Fellowship, the South Dakota Governor’s Award for Outstanding Creative Achievement in Arts, and the Lifetime Achievement Award as Artist and Scholar from the Native American Art Studies Association.

He is a published author. Works include the section on Sioux Indian Arts for “The Illustrated History of the Arts in South Dakota” published during the State’s Centennial in 1989; the forward for “Spirit Beings and Sun Dancers: Black Hawk’s Vision of the Lakota World”; “The Lakota Sun Dance – Historical and Contemporary Perspectives” in “Sioux Indian Religion” with Raymond J. DeMaillie/Douglas R. Parks, Norman (1987); “Eagles Fly Over,” and “Our Other Selves,” in “I Become Part of It: Sacred Dimensions in Native American Life,” New York, D.M. Dooling/Paul Jordan-Smith (1989); “Art and Indian Children of the Dakotas, Book Five – An Introduction to Art and Other Ideas”; and a book of his works, “Transformation and Continuity in Lakota Culture: The Collages of Arthur Amiotte.”