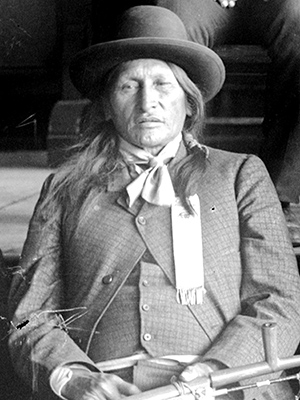 Uŋpȟáŋ Glešká was a leader of the Minŋecoŋjou Lakota Sioux. He was a son of Lone Horn and became a leader upon his father’s death. He was a highly renowned leader with skills in war and negotiations. A United States Army soldier at Fort Bennett nicknamed him Big Foot (Sitȟáŋka).

During the 1870s, Spotted Elk allied his tribe against the US Army together with half-brother Sitting Bull (Tatáŋka Íyotake), nephew Crazy Horse (Tašhúŋka Witkó), and brother Touch the Clouds (Maȟpíya Ičáȟtagya). Spotted Elk saw no significant action during the Great Sioux War of 1876-77. However, his tribe suffered during the war, after which they surrendered.

Due to poor living conditions on the reservations, the Lakota struggled greatly to survive. In some cases, Indian agents were corrupt, undertaking fraud and stealing Lakota supplies/annuities. By 1889, they were in despair and looked for change.

The radical solution came in the Ghost Dance movement, a new religion initiated by Paiute prophet Wovoka. Spotted Elk and the Lakota became among the most enthusiastic believers in the Ghost Dance ceremony when it arrived in the spring of 1890. Although governmental reservation rules outlawed the practice of the religion, the movement swept like a wildfire through the camps, and local Indian agents reacted with alarm. Some agents successfully suppressed the dancers, while others called for federal troops to restore order.

After Sitting Bull was killed on Standing Rock Reservation, his followers fled for refuge at the camp of his former-ally and half-brother, Chief Spotted Elk. Fearing arrest and government reprisals against his band, Spotted Elk led his band south to the Pine Ridge Reservation, South Dakota, at the invitation of Chief Red Cloud (Maȟpíya Lúta). Red Cloud hoped that his fellow chief could help make peace. Seeking safety, flying a white flag and with no intention of fighting, Spotted Elk contracted pneumonia on the journey to Pine Ridge.

On December 28, 1890, Maj. Samuel M. Whitside’s battalion of the 7th Cavalry intercepted the Lakota. Ill with pneumonia, Spotted Elk surrendered peacefully with his band. The Cavalry took them into custody, escorting them to a campsite near Wounded Knee Creek, Pine Ridge, where they were forced to camp. The site had an established store and several log houses.

The night before the massacre, Col. James W. Forsyth arrived at Wounded Knee Creek and ordered his men to position four Hotchkiss cannons around the Lakota camp. The following morning, Forsyth’s soldiers entered the camp and demanded that the Lakota give up their weapons. In the ensuing confrontation, a firearm was discharged. It was later believed to have been by a deaf man, Black Coyote, who presumably did not hear the command to put down his rifle. A large gunfight quickly ensued. The US forces killed 153 Lakota, primarily non-combatants (women and children), and Spotted Elk was among those killed.