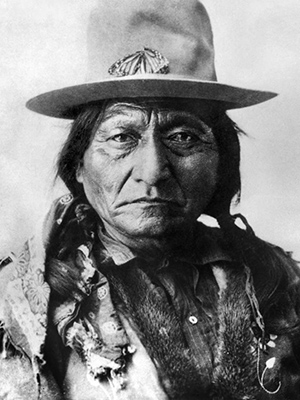 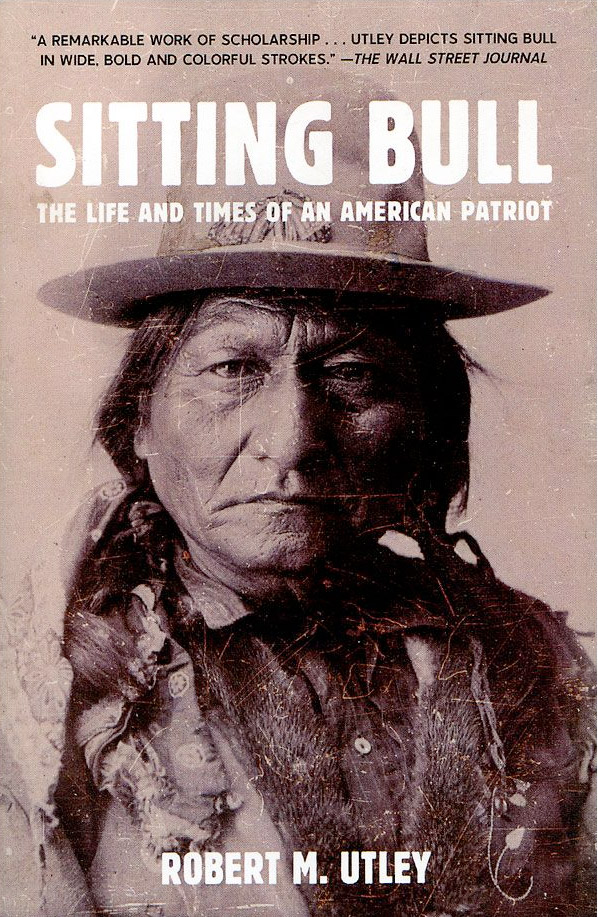 Sitting Bull was a Hunkpapa Lakota and holy man. Under him, the Lakota bands united for survival on the northern plains. Sitting Bull remained defiant toward American military power and contemptuous of American promises to the end.

The future leader was born around 1831. His birthplace was on the Grand River in South Dakota at a place the Lakota called “Many Caches” for the number of food storage pits they had dug there.

Later in life, he was given the name Tatáŋka Íyotake. The leader’s name describes a buffalo bull sitting intractably on his haunches. It was a name the holy man would live up to throughout his life.

As a young man, Sitting Bull became a leader of the Strong Heart Warrior Society. Later, he became a distinguished member of the Silent Eaters, a group concerned with tribal welfare. At 14, he went to battle in June 1845 in a raid on the Crow. There, he saw his first encounter with American soldiers. The US Army had mounted a broad campaign in retaliation for the Santee Rebellion in Minnesota, a rebellion in which Sitting Bull’s people played no part.

The following year, Sitting Bull fought US troops again at the Battle of Killdeer Mountain. And, in 1865, he led a siege against the newly established Fort Rice in North Dakota. Widely respected for his bravery and insight, he became head of the Lakota nation in 1868.

Sitting Bull’s courage was legendary. In 1872, Sitting Bull led four other warriors out between the lines during a battle with soldiers protecting railroad workers on the Yellowstone River. He sat calmly, sharing a pipe with them as bullets buzzed around. Sitting Bull carefully reamed the pipe out when they were finished and casually walked away.

The stage was set for war between Sitting Bull and the US Army in 1874. An expedition led by General George Armstrong Custer confirmed gold had been discovered in the Dakota Territory’s the Black Hills, an area sacred to many bands. This land was placed off-limits to white settlement by the Fort Laramie Treaty of 1868. Despite this ban, prospectors began a rush to the Black Hills, provoking the Lakota to defend their land.

When government efforts to purchase the Black Hills failed, the Fort Laramie Treaty was set aside. The commissioner of Indian Affairs decreed all Lakota not settled on reservations by January 31, 1876, would be considered hostile. Sitting Bull and his people held their ground.

In March, as three columns of federal troops under Generals George Crook, Alfred Terry, and Colonel John Gibbon moved into the area, Sitting Bull summoned the Lakota, Cheyenne, and Arapaho to his camp on Rosebud Creek in Montana Territory. There, he led them in the sundance ritual, offering prayers to Wakáŋ Táŋka, the Great Spirit. Sitting Bull slashed his arms 100 times as a sign of sacrifice for his people. During this ceremony, Sitting Bull had a vision. He saw soldiers falling into the Lakota camp like grasshoppers falling from the sky.

Inspired by this vision, the Oglala Lakota war leader, Crazy Horse, set out for battle with a band of 500 warriors. On June 17, he surprised Crook’s troops and forced them to retreat at the Battle of the Rosebud. To celebrate this victory, the Lakota moved their camp to the valley of the Little Bighorn River. They were joined by 3,000 more Indians who had left the reservations to follow Sitting Bull.

They were attacked on June 25 by the 7th Cavalry under George Armstrong Custer. Custer’s badly outnumbered troops first rushed the encampment as if in fulfillment of Sitting Bull’s vision. Then, the cavalry made a stand on a nearby ridge where they were destroyed.

Public outrage at this military catastrophe brought thousands more cavalrymen to the area. Over the next year, they relentlessly pursued the Lakota, who had split up after defeating Custer. Many were forced to surrender. Sitting Bull remained defiant. In May 1877, he led his band to Canada, beyond the reach of the U.S. Army. When General Terry traveled north to offer him a pardon in exchange for settling on a reservation, Sitting Bull angrily sent him away.

However, four years later, Sitting Bull found it nearly impossible to feed his people in a world where the buffalo was almost extinct. So, he moved south to surrender.

On July 19, 1881, Sitting Bull’s young son handed his father’s rifle to the commanding officer of Fort Buford in Montana. Through this action, Sitting Bull hoped to teach his son “that he had become a friend of the Americans.”

Yet, Sitting Bull said, “I wish it to be remembered that I was the last man of my tribe to surrender my rifle.” He asked for the right to cross back and forth into Canada whenever he wished and for a reservation of his own on the Little Missouri River near the Black Hills.

Instead, he was sent to Standing Rock Reservation. His warm reception there raised Army fears about a fresh uprising. So, Sitting Bull and his people were taken further down the Missouri River to Fort Randall. They were held as prisoners of war for nearly two years.

Finally, on May 10, 1883, Sitting Bull rejoined his tribe at Standing Rock. The Indian Agent in charge of the reservation, James McLaughlin, was determined to deny the great leader any special privileges. McLaughlin even forced him to work in the fields, hoe in hand.

Sitting Bull still knew his own authority. When a delegation of U.S. Senators came to discuss opening part of the reservation to white settlers, he spoke forcefully, though futilely, against their plan.

In 1885, Sitting Bull was allowed to leave the reservation to join Buffalo Bill’s Wild West Show. He earned $50 a week for riding once around the arena. Sitting Bull also charged whatever he could for his autograph and picture. Unable to tolerate white society any longer, he stayed with the show for four months.

Returning to Standing Rock, Sitting Bull lived in a cabin near his birthplace on the Grand River. Still living with two wives and rejecting Christianity, Sitting Bull refused to give up his old ways as the reservation’s rules required. He did, however, send his children to a Christian school because he believed the next generation of Lakota would need the education to survive.

After returning to the reservation, Sitting Bull had another vision, like the one foretelling of Custer’s defeat. This time, he saw a meadowlark on a hillock beside him. He heard it say, “Your own people, Lakotas, will kill you.” Nearly five years later, this vision also proved true.

In the fall of 1890, a Minŋecoŋjou Lakota named Kicking Bear came to Sitting Bull with news of the Ghost Dance, a ceremony that promised to rid the land of white people and restore the Indian way of life. Lakota had already adopted the ceremony at the Pine Ridge and Rosebud Reservations, and Indian Agents there had already called for troops to bring the growing movement under control.

Sitting Bull was buried at Fort Yates, ND. In 1953, his remains were moved closer to his birthplace near Mobridge, SD. Today, a granite shaft marks his grave.

He was remembered among the Lakota as an inspirational leader and fearless warrior and as a loving father and gifted singer. Sitting Bull was a pleasant man and friendly toward others. His deep faith gave him prophetic insight and lent special power to his prayers.