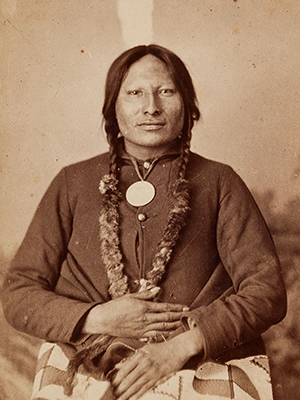 Rain-in-the-Face was a leader of the Lakota tribe. He was among those who defeated George Armstrong Custer and the US 7th Cavalry Regiment at the 1876 Battle of Little Big Horn.

Born in the Dakota Territory near the forks of the Cheyenne River in about 1835, Rain-in-the-Face was from the Hunkpapa band of the Lakota nation. His name may have been given to him due to a fight with a Cheyenne boy when he was pretty young. His face was splattered like rain with his Cheyenne adversary’s blood.

Late in his life, he related that the name was reinforced by an incident when he was a young man in a battle in a heavy rainstorm with a band of Gros Ventres. At the end of the lengthy combat, his face was streaked with war paint.

He first fought against the whites in 1866 in a raid against Fort Totten in what is now North Dakota. He again fought the U.S. Army in the Fetterman massacre near Fort Phil Kearny in present-day Montana in the same year. In the Black Hills War, he led a raid at the Tongue River in which two white civilians accompanying Custer’s cavalry were killed. He returned to the Standing Rock Reservation but was captured by Custer after being betrayed by reservation Indians. He was taken to Fort Abraham Lincoln and incarcerated. However, he was freed by a sympathetic soldier and returned to the reservation, then fled to the Powder River. In the spring of 1876, he joined the hostile Sioux under Sitting Bull and traveled with him to the Little Big Horn River in early June.

During the subsequent fighting on Custer Hill on June 26, Rain-in-the-Face is alleged to have cut the heart out of Thomas Custer, a feat that was popularized by American poet Henry Wadsworth Longfellow in “The Revenge of Rain in the Face.” According to legend, Tom Custer had unjustly imprisoned Rain-in-the-Face. Some contemporary accounts claimed that the Rain-in-the-Face had personally dispatched George Custer as well, but in the confused fighting, a number of similar claims have been attributed to other warriors.

Rain-in-the-Face died at his home in Bullhead Station on the Standing Rock Reservation in North Dakota after a lengthy illness.