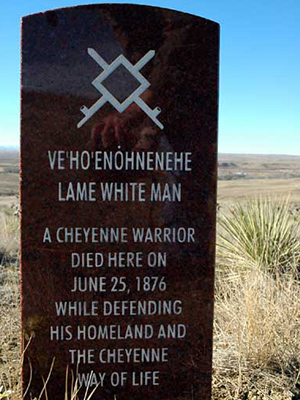 Lame White Man, Ve Ho Enóhnenehe was a Southern Cheyenne battle leader who fought at the Battle of the Little Big Horn and was killed there. He was also known as Bearded Man to the Lakota. He was the husband of Twin Woman and father to Red Hat and Crane Woman.

During the battle, he wore a captured cavalry jacket found tied to the cantle of a saddle. It is said that a Minniconjou Lakota warrior mistook him for an Indian scout and killed him before he could realize his mistake.

Friends of the Little Bighorn Battlefield