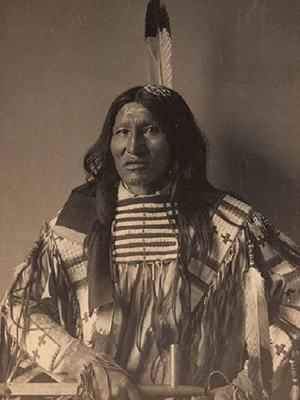 Mató Wanáȟtake was born around 1846 among the Oglala Lakota people. Kicking Bear’s father was Black Fox, and his mother was Iron Cedar Woman.

Kicking Bear married Woodpecker Woman, the daughter of Chief Big Foot. By his marriage to a leader’s daughter, Kicking Bear became a leader of a band in the Lakota Nation. Kicking Bear distinguished himself in several battles for Lakota land during the War for the Black Hills (1876-77), including the Battle of Little Big Horn (Greasy Grass).

In 1889, Kicking Bear traveled with his fellow Lakota Short Bull to Nevada to learn the new Ghost Dance religion from the movement’s leader, Wovoka and brought it back to his people. The dance performance was supposed to revive the native people’s fortunes and traditions, rejoin them with their ancestors, and return their lands to a pristine state with buffalo and other wildlife in abundance. In addition, the earth would swallow up the white man.

Upon Kicking Bear’s return, Sitting Bull, Kicking Bear’s uncle, asked him to demonstrate the dance at the Standing Rock Reservation. In October 1890, white officials became concerned about the ritual and dispatched police to escort Kicking Bear off the reservation.

Nevertheless, Kicking Bear had taught the Ghost Dance to his people. Within two years, the dance would spread over most of the western half of the United States.

Just after Christmas in 1890, a shot rang out, and the US Army effectively crippled the Ghost Dance movement when it slaughtered 290 men, women, and children of Big Foot’s band at a camp along the Wounded Knee Creek on the Pine Ridge Reservation.

Government agents arrested Kicking Bear and imprisoned him in Fort Sheridan, IL. To alleviate tension and the possibility of renewed hostilities following the decline of the Ghost Dance, the US Government persuaded a group of prominent Sioux leaders to tour Buffalo Bill Cody’s Wild West Show. In 1891, Kicking Bear’s sentence was commuted, provided he join the show’s European tour, an experience he would find humiliating.  After a year-long tour, Kicking Bear returned to the Pine Ridge Reservation to care for what mattered the most to him – his family.

A gifted artist, Kicking Bear painted his account of the Battle of Greasy Grass at the request of artist Frederic Remington in 1898, more than twenty years after the battle.