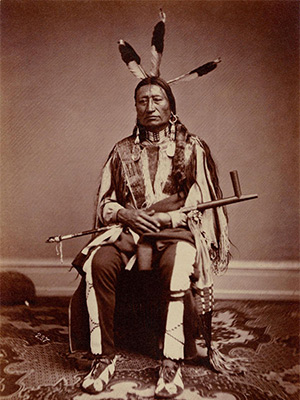 Iron Nation, Máza Oyáte was a principal chief of the Lower Brule Tribe and one of the only chiefs to try to work with the US government and the settlers.  He led the Lower Brule people through some of its most challenging years, ending their nomadic lifestyle to forced life on reservations.

Iron Nation worked diligently, as a warrior and statesman, to ensure the survival of his people. He is best known for signing the significant Dakota Territory treaties of the 1800s, including the 1851 Fort Laramie Treaty, the 1865 Fort Sully Treaty, and the Fort Laramie Treaty of 1868 that established the Great Sioux Reservation.

Iron Nation died as the Tribe’s last Head Chief on November 14, 1894, in the Iron Nation District of the Lower Brule Reservation. He is buried in the Messiah Cemetery at Iron Nation.

The people of Lower Brule erected a nearly 7-foot tall granite monument over his grave, the first monument over the grave of a Lakota leader in the history of South Dakota.  In 2014, his gravesite was listed on the South Dakota State and National Register of Historic Places.