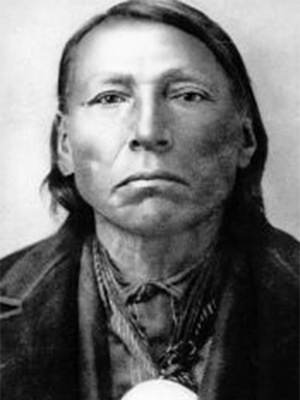 Etokeah was a great Minŋicoŋjou Lakota war leader. He is primarily known for his skills during the 19th Century Lakota-US Government battles. His exact birth date and facts of parentage were not recorded. However, he was first noticed in 1866 when he led the charge against Captain William Fetterman’s soldiers outside Fort Phil Kearney in Wyoming.

Hump did not sign the Treaty of Fort Laramie in 1866. Because of his action, he was deemed a hostile or “non-treaty” leader by the US Government. He was a comrade-in-arms of Crazy Horse, Red Cloud, and other great Sioux leaders. In 1876, he led his warriors into battle against Generals George Crook and George Custer.

After the defeat of the Sioux in the 1880s, he briefly lived in Canada. He eventually returned to the United States but remained hostile to the whites. In company with most of the Sioux, his band was intrigued by the Ghost Dance religion. Although Hump seems never to have become a true believer, he did lead his people in the Ghost Dance raids until early December of 1890. The U.S. Army was alarmed by the Ghost Dance, and they sent emissaries to all of the prominent chiefs. Captain Ezra Ewers, an old friend, was sent to speak with Hump. Ewers convinced Hump of the futility of armed resistance. At this point, Hump separated his band from the Dancers and relocated to Fort Bennett.

The Ghost Dance movement culminated in the massacre at Wounded Knee Creek in 1890.  After the infamous massacre and subsequent events in 1890, Hump and several other Sioux leaders went to Washington, DC. They pleaded for fair treatment of their people.

Some of their requests were honored; however, they failed to gain concessions in other vital areas. Reservation confinement continued, effectively ending the old way of life. Hump died at Cherry Creek, SD, on the Cheyenne River Sioux Reservation in December 1908 at 70. He is buried in the Episcopal Cemetery near there.