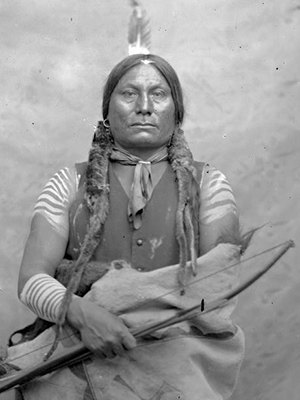 “Man Who Goes in the Middle,” or Phizí, a Húŋkpapa  Lakota leader, was one of the significant Indian field commanders at the Battle of the Little Bighorn.

He was born around 1840 on the Moreau River in South Dakota. He was an orphan, and little is known of his parents. He earned his name when, as a hungry youngster, he tried to eat the gall bladder of an animal. Later in his youth, he was given the name Matohinsa, “Bear Shedding His Hair,” but the name Phizí was the one by which he was best known.

As a young man, Gall took part in many battles fought by the Dakota bands under Red Cloud. When the Treaty of 1868 was signed, Gall was one of the many who refused to comply with the provision of all Dakota Indians returning to reservations.

Sitting Bull adopted Gall as a younger brother, and he later became a Dakota war leader. Gall was accused of a murder he did not commit, and the Army put a price on his head. Gall went into Fort Berthold to protest. He was seized, bayoneted, and left for dead. Remarkably, he was able to crawl away and survive. Later, he took his revenge by preying upon the Bozeman Expedition and was involved in several disastrous raids.

In 1876, Sitting Bull, Gall, and their warriors were in a massive encampment on the Little Bighorn River. It was perhaps the largest single gathering of Indian forces yet seen in the Northern Plains area. On June 25, troops under General Custer and Major Reno attacked. Gall sprang into action and turned the flank of Reno’s men, forcing them to retreat. He and Crazy Horse then surrounded Custer’s cavalry and wiped them out.

Gall first pursued Reno’s detachment, but he returned to the main camp when it became apparent the main body of the US Army was en route to the scene. The encampment broke up, and the various bands began a retreat to the north. After several skirmishes with the Army, Gall, Sitting Bull, and their followers escaped into Canada.

Winters there were harsh, and many became discouraged. After four years, Gall, Crow Chief, and others denounced Sitting Bull and returned to the United States to settle at Standing Rock Reservation.

In 1881, Gall reconciled himself to white authority and became a farmer. Eventually, he befriended James McLaughlin, an Indian Agent. McLaughlin convinced Gall the Dakota should send their children to school.

When Sitting Bull returned from Canada in 1881, Gall opposed the policies of his one-time mentor, accusing him of cowardice. Gall had come to realize the futility of any further armed resistance. It was a time of relative peace, and Gall grew to be highly regarded by whites for his wisdom and honesty. He was appointed as a judge of the Court of Indian Affairs in 1889, and in the same year, he was instrumental in gaining the ratification of the last agreement with the Dakota Indians. This ratification broke up the Sioux reservation into several smaller parcels, and some of the lands were ceded to the whites.

During his last years, Gall was an envoy to Washington, DC, on behalf of his tribe. He enjoyed a place of considerable prestige until his death at Oak Creek, SD on December 5, 1895, at 54.