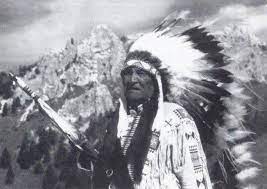 Frank Fools Crow was a Lakota spiritual leader, Yuwipi medicine man, and Black Elk’s nephew. He was instrumental in negotiating the end of the insurrection at Wounded Knee in 1973 and the subject of a biography by Thomas Mails.

Born on the Pine Ridge Reservation near Wounded Knee, SD, he quit school in the third grade to work to help support his family. As a young man, he traveled around the United States with the Buffalo Bill Cody Wild West Show. In 1983, he presented the fifth and current Chief Illiniwek Indian regalia to the University of Illinois.

In 1973 members of the American Indian Movement seized the village of Wounded Knee to protest the United States Government’s policies on Native Americans. The insurrection lasted for 71 days. It ended after federal officials and a Sioux delegation, of which Fools Crow was a prominent member, reached an agreement.

In 1975 he was invited to offer a prayer before the United States Senate. This is the prayer he gave:

In the presence of this house, Grandfather, Wakȟáŋ Tȟáŋka, and from the directions where the sun sets, and from the direction of cleansing power, and from the direction of the rising, and from the direction of the middle of the day. Grandfather, Wakan-Tanka, Grandmother, the Earth who hears everything, Grandmother, because you are woman, for this reason, you are kind, I come to you this day. To tell you to love the red men, and watch over them, and give these young men the understanding because, Grandmother, from you comes the good things, good things that are beyond our eyes to see have been blessed in our midst for this reason I make my supplication known to you again. Give us a blessing so that our words and actions be one in unity and that we be able to listen to each other. In so doing, we shall, with good heart, walk hand in hand to face the future. In the presence of the outside, we are thankful for many blessings. I make my prayer for all people, the children, the women and the men. I pray that no harm will come to them, and that on the great island, there be no war, that there be no ill feelings among us From this day on, may we walk hand in hand. So be it.

On September 10, 1976, Fools Crow delivered a lengthy speech to the Congressional Subcommittee on Interior and Insular Affairs. The speech, entitled the Joint Statement of Chief Frank Fools Crow and Frank Kills Enemy on Behalf of the Traditional Lakota Treaty Council Before Honorable Lloyd Meads Sub-Committee on Interior and Insular Affairs, was a plea for the return of the Black Hills to his people. Later, the speech was printed up in poster form and widely disseminated over the reservations.