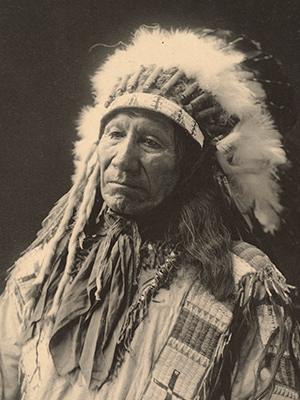 American Horse was a leader of the Oglala Sioux during the Wars of the 1870s. He was also the nephew of the elder American Horse and son-in-law of Red Cloud.

Born as Wašíčuŋ Tašhúŋka to Sitting Bear in the Black Hills of present-day South Dakota, American Horse became known as a prominent warrior during the Bozeman Trail War in 1866.

Representing his tribe, American Horse was one of the signers of a treaty between the Sioux and the United States government in 1887. The treaty reduced the lands of the Sioux Reservation in the Dakota Territory by half. More than half of his tribe opposed the treaty – spurred on by the Ghost Dance uprising as well as the recent death of Sitting Bull. Led by Big Foot, they prepared to make a stand against the federal government. American Horse withdrew from the council.

American Horse, believing that resistance was futile, persuaded the Oglala to agree to the terms of the treaty. The tribe settled on the Pine Ridge Reservation.

Later, American Horse led a delegation to Washington, DC in 1891, where he successfully gained government support for improved rations and humane treatment of the Sioux. He, along with other Sioux leaders, toured with Buffalo Bill’s Wild West Show. He died in Pine Ridge, South Dakota on December 16, 1908.