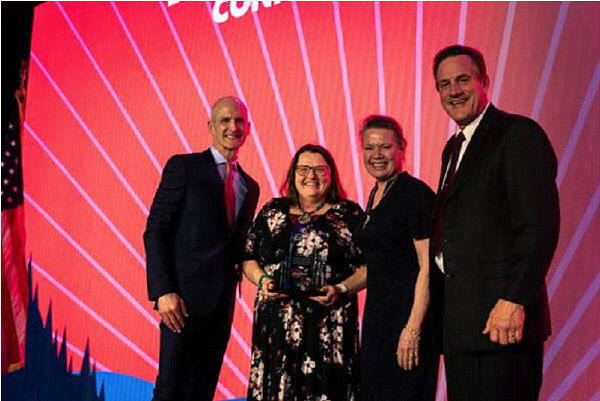 (Chamberlain, SD) Few of Wanda Bunker’s colleagues on St. Joseph’s Indian School campus will be surprised to learn that she recently was awarded a Ruth Ziolkowski* Outstanding Hospitality and Customer Service Award by the South Dakota Department of Tourism. The veteran houseparent and current museum receptionist is well-known for her trademark hospitality, including a warm, grounding smile and pleasant greeting. “Everyone who comes through the front door feels that they are the center of attention,” explained Museum Director Dixie Thompson.

But Bunker was surprised when, on January 20 at the Governor’s Conference on Tourism in Pierre, SD, hers was one of four names called for the award that recognizes persons whose work demonstrates an outstanding spirit of hospitality. Her first words on receiving the award were, “I am blown away.”

Secretary of the Department of Tourism Jim Hagen commented, “Across every region of South Dakota, it’s folks like these that are the rock of the tourism industry, every day, they show up. They pour their hearts into their careers, and they embody the hospitality that South Dakota is known for.”

At the same time, Bunker is no stranger to accolades. For the past three years, the Department of Tourism has recognized her top-notch customer service with what is now called the South Dakota Great Face.