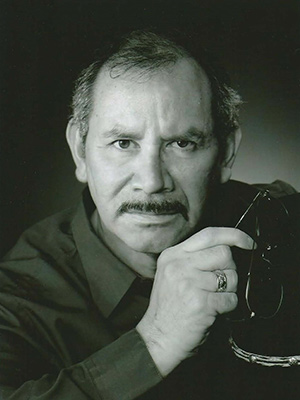 Donald F. Montileaux, an enrolled member of the Oglala Lakota Nation, was born in 1948 on the Pine Ridge Indian Reservation to Floyd and Clara Montileaux. He attended school in Rapid City, SD, graduating in 1966 from the Rapid City High School. A student of art since the age of five, he began drawing Mickey Mouse as his model at the kitchen table, with his father and his mother being the judges. He knew then that to be an artist was what he most desired.

In 1964 and 1965, he attended workshops under noted artist Oscar Howe at the University of South Dakota in Vermillion, SD. He also credits his friend and mentor, the late Herman Red Elk, as his primary artistic influence.

“I have to acknowledge these two gentlemen and give them credit for where I am today because they are the ones who gave me a sense of belonging, of who I was as a Lakota person. These two men also gave me my Lakota name – Yellowbird,” states Montileaux,

Montileaux received his formal art training at the Institute of American Indian Arts in Santa Fe, NM, attending from 1966 to 1969, where he majored in Fine Art and Advanced Painting. At the Institute, his fellow students provided him with a tremendous knowledge of American Indian tribes from all over the United States. After Santa Fe, Montileaux was offered a full scholarship to the Rhode Island School of Design, Providence, RI, but he returned to Spearfish, SD, and attended Black Hills State College from 1969 to 1970.

Later he was offered a position teaching art on a Cultural Follow Through Program sponsored by the Bureau of Indian Affairs Aberdeen Area Office. That program involved a traveling art van that took art to North Dakota and South Dakota reservations.

Montileaux started his professional career as an art teacher on the Cheyenne River Reservation. He was also Museum Aid at the Indian Arts and Crafts Board, Sioux Indian Museum, Rapid City, SD, and Man Power Director at United Sioux Tribes Development Corporation.